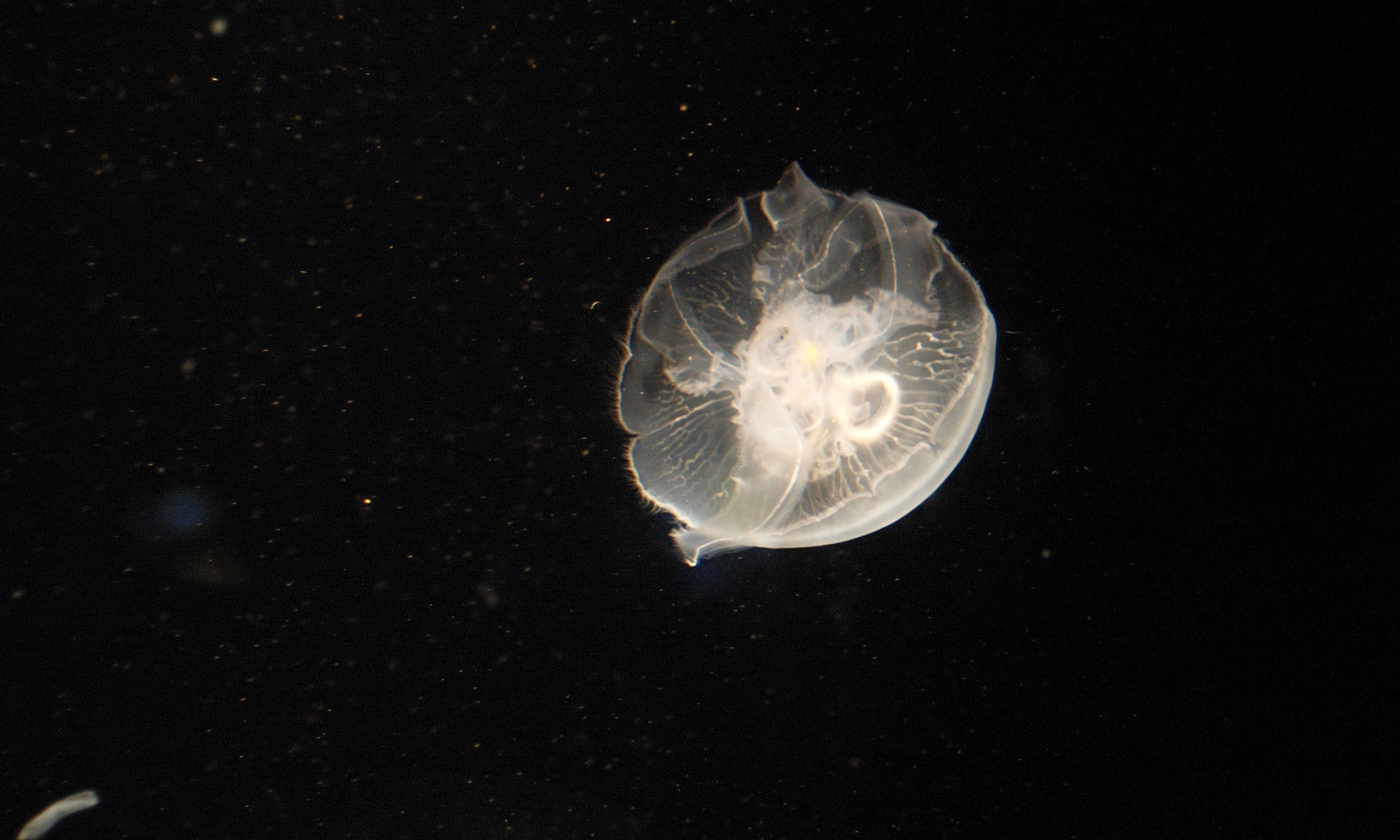 Sitting in the front of a canoe, I dipped my paddle into the salty waters of the Damariscotta River, a nineteen-mile long tidal river that feeds into the Gulf of Maine. A faint breeze rippled the evergreen reflections on the surface like brush strokes of an impressionist painting. All was calm on my morning paddling trip at the end of June. Marianne — a longtime Mainer and family friend — steered us away from the dock, doing her best to keep us in a straight line as we headed to an island to scope out an eagle’s nest.

As I worked on my J-stroke on the starboard side of the canoe, it seemed like I was stirring a big simmering pot of jellyfish stew. Moon jellies were so thick that with every dip of the paddle I smacked dozens of them. Their translucent bodies mesmerized me. Especially their inability to escape as I repeatedly assaulted them. Their umbrella shape pulsed, uncovering four bright gonads symmetrically placed in the center and lit up like searchlights. Tentacles flailed around them like outstretched greedy fingers. I had grown to dislike jellies — having been stung one too many times as a kid by species like sea nettles that would leave welts on my limbs — so I experienced some guilty pleasure from whacking them with my wooden paddle.

I turned my head to Marianne and asked if this abundance of moon jellies was normal. Her sun-creased forehead wrinkled even more as she scrunched up her face and shook her gray bob no. “This is the worst I’ve ever seen them,” she replied in a rich Maine accent. Though she is a regular swimmer, she would not risk the waters with jellies this thick. Waving her slender hand across the horizon, she told me that a thin green layer of algae had been invading the bay for a couple of years now. She nodded at me with a concerned look to indicate that something was off.

Jellyfish are not fish at all but gelatinous zooplankton, common in all the world’s oceans. Moon jellies, scientifically named Aurelia aurita, are a species that can be found around the globe and easily adapt to varying marine environments. They are typically not found in the coastal waters of Maine, however, or at least they weren’t in large numbers until last year. In 2014, there were numerous reports of jellyfish outbreaks along the coast. The two culprits causing the ruckus: moon jellies and lion’s mane jellies.

Eager to learn what the experts thought was causing the jelly outbreak during my paddling trip, I sought out Nick Record, a senior scientist at the Bigelow Laboratory for Ocean Sciences in Boothbay, Maine, and one of the go-to jelly experts for the area. Even he was not sure why the jellies are showing up in hordes.

“If it were just last summer, you could say these species were in abundance offshore, and they are just being carried in by winds or something,” he told me. “But because we are seeing them again this summer, then maybe there is something more established going on. Like there is actually a niche for them inshore.”

One explanation for the jelly event is that ocean currents brought them inshore. Another possibility is warming water temperature. “For the past ten years, the warming in the Gulf of Maine has been faster than 99.9 percent of the rest of the ocean,” Record said. “The rate is just off the charts.” The Gulf of Maine has warmed at a rate of half a degree Fahrenheit per year for the last decade. This rate is ten times faster than in previous decades. Scientists think the warming of the Gulf could be from a variety of factors including natural variations in the ocean currents and circulation, as well as the underlying impact of climate change, but it’s not easy to pinpoint one answer.

The big question scientists are trying to answer is if the outbreak of jellies in many coastal areas around the world — like the moon jellies in the Damariscotta — is an anomaly or the new normal. Research shows that jellies come and go, boom or bust, and a twenty-year fluctuation could be part of a natural cycle. Despite the sizeable population numbers of these ancient species, dating back to fossil records 500 million years old, little research has been done on their life cycles and feeding preferences. For these reasons, scientists are hesitant to draw conclusions. Record himself has no funding to collect jellyfish data and only two data points: one from 2014 and now 2015.

Since jellyfish expertise in Maine is rare, I decided to track down one of the premier jelly specialists in the United States, Jenny Purcell. Purcell, a marine scientist from Western Washington University, has been studying jellies and other spineless species all over the globe since the late 1970s. When she first started, few saw the connection she did between jellies and the bigger ecosystem. “No one wanted to look at things you couldn’t eat,” she bemoaned when we spoke. It has only been in the last decade that interest has grown in how humans influence jelly populations.

Despite the elusive behavior of the animals and lack of funding for research, Purcell didn’t give up trying to understand jellyfish behavior. “Nobody saw the connection I was seeing, that most of these jellyfish were eating baby fish and eggs and larvae of fish, and also competing with them for food,” she said. “So you have these huge populations of jellies, and nobody knows what they’re doing and what their feeding impacts are doing. And it still remains that way.”

Although jellies are a natural part of the ecosystem, too many can cause problems, and the problems are plentiful. Jellyfish stings can be painful and sometimes deadly, particularly from species like the box jelly, and their presence makes tourists reluctant to venture into the water. They are known to clog power plant cooling intake valves and have forced operations to shut down from California to Japan to Sweden. And as Purcell noted, jellies are voracious eaters and often compete with fish for food, with jellies having an advantage because they don’t require light to see their prey.

Masters at adapting, jellies can thrive in low-oxygen, polluted, and abnormally warm waters, conditions that are becoming more common in coastal regions with increasing development and populations. Overfishing has also reduced predators that help keep jellies in check. The combination of these stresses to the ocean may be unbalancing the whole system, making room for “tough” animals like jellyfish that do better than other species in these stressed environments.

Steering our canoe around the heart-shaped island with the eagle’s nest, three different oyster farms surrounded us, each visible as either floating cages or buoys marking submerged structures. Currently, there are seven leaseholders for shellfish farms — mostly oyster — in the Damariscotta River. According to some research, the availability of oyster farms could be providing additional places for the jellies to attach. From the underside of boats and docks to aquaculture farms, hard structures provide support for the early life stages of moon jellies.

Of the jellies that are studied, the life cycle of moon jellies is the most well known, due to their size and widespread abundance. After a mature moon jelly reproduces, the larvae float to a hard surface, secure themselves, and morph into polyps. It is the polyp stage that is the most stable and can outlast long periods of starvation. During this stage, polyps alternate between reproducing more polyps and going through strobilation, where the polyps morph into free-floating ephyra. Ephyra look like miniature adults, but with stubby arms, and eventually mature, where reproduction will begin all over again.

In the early 2000s, Purcell was conducting research in Tapong Bay, a lagoon in Taiwan, where extensive aquaculture — both hanging oyster rafts and fish pens — had been around for decades. The lagoon was hampered by eutrophication, due to reduced water circulation and increased nutrients from the aquaculture and local urban development. Moon jellies were rampant. When Purcell removed the oyster rafts, the moon jellies disappeared. She attributed the disappearance to the lack of surfaces for the polyps to latch onto, along with increased light by removing shade caused by the rafts, and better water circulation. To Purcell the conclusions were clear: aquaculture was inadvertently providing a haven for the jellies.

Of the oyster farms found in Maine, Purcell said, “That’s a possible smoking gun for the jellyfish bloom in Maine.” One way to test this would be to inspect the cages and nets to see if jellyfish polyps have colonized — something that hasn’t been done.

Yet the story is not so simple. Oysters are known to benefit coastal waters, as well. As filter feeders, oysters can clean up excess nutrients and phytoplankton to help clarify the water. In turn, this helps light penetrate the water and stimulate the growth of sea grasses, which further advances the health of an ecosystem. Oyster farms also provide habitat for juvenile fish. So linking the hypothesis of oyster farms to the jellyfish outbreaks creates a complicated tension among different communities.

Record is a little skeptical that the oyster farms are the culprit in the Damariscotta, mostly because last year’s outbreak was up and down the entire coast, not simply in places where aquaculture was present. He doesn’t rule out, however, the effect that dredging — scraping the sea floor with a heavy basket to collect bottom dwelling species like oysters — could have on the system by removing predators for jellies. Warmer ocean temperatures, decreased water quality, and more breeding ground habitat in coastal Maine could also prime the environment for jelly outbreaks.

Three weeks after I had noticed the outbreak and returned home from scenic Maine, I called Marianne to see what was new. “They swarmed by the thousands. So thick at one point that it felt like you could step out of the canoe and walk on them,” she said. “And now they are gone. They were there one day and then gone the next.”

A review of the literature, published in the 2014 book Jellyfish Blooms, summarizes the causes of jellyfish death — disease, lack of food, predation by other species, parasite infection, changes in temperature and salinity — and concludes that fatality is likely due to several of these factors. Or perhaps, in the case of the moon jellies in Maine, they could have just been swept away by changing currents.

The fate of the jellies in the Damariscotta is unknown, but researchers are not giving up. Record started a citizen science effort, asking locals and fishermen to send in reports when they see jellyfish. “People are concerned about this up and down the coast, or they are at least interested in it, and they are sending in sightings and photos,” he said. Record plans to use these reports to create a map of jellyfish sightings for the region.

One of the best advantages about an engaged public is that it helps science. When people care about their backyard, there is an incentive, and potentially support, for scientists to help answer these challenging questions of societal importance. For the jellies of the Damariscotta, these questions include: Why are these jellies showing up, will this continue in the future, and is this a threat to the local fishing and oyster economy? The rise and fall of moon jellies in the Damariscotta could just be an anomaly for two years in a row, or it could be a clue that the weights of the environmental scale are shifting in coastal Maine.

A science lover and outdoor explorer, Kristan Uhlenbrock is searching for life’s interesting people, places, and peculiarities under the sea. Her writing has appeared in Motherboard, Eos, Greater Greater Washington, among others. Follow her @oceankris and view her work at www.kristanuhlenbrock.com.